Five years on from Freedom and Choice, the New Romantic generation is dancing towards a decidedly unromantic retirement. Legal and General Investment Management (LGIM) and NMG Consultingexamine how you could boost the outlook for non-advised prospective retirees.

The Freedom and Choice reforms of 2015 opened up a swathe of new options for savers at retirement. They opened the door to staying invested, and bolstered the seemingly universal allure of tax-free cash.

Among the first to benefit from these changes would be Generation X. The older section of this group, who grew up with cassette players, neon jeans and Thatcherism, are now in their early-to-mid 50s. Neither fully ‘generation DB’ nor ‘generation DC’, many do not seek financial advice. And many will need extra help with their savings and planning.

But, over five years on from the changes, how has prospective retirees’ decision-making evolved? To find out, we conducted 40 in-depth interviews alongside quantitative research with 1,150 defined contribution (DC) pension scheme members aged 50+. All were in the run-up to retirement or had already entered it, and none had received formal financial advice.

Stuck in the middle

Sandwiched between Baby Boomers and Millennials, Generation X truly are the ‘squeezed middle’ – in more ways than one. Many in this cohort lack earlier generations’ property and investment assets, as well as higher value defined benefit (DB) or personal pensions. Nor is this generation supported by early access to the state pension.

Along with relatively precarious finances, Xers face myriad financial pressures. Care costs for children and parents, a reduction in state benefits and unemployment uncertainty have all been compounded by COVID-19 and asset volatility. The pandemic is the single biggest trigger of anxiety for all age groups about retirement finances. 57% of the pre-retired group told us that COVID-19 has impacted on their confidence in their retirement finances, compared to 41% of the already-retired group. 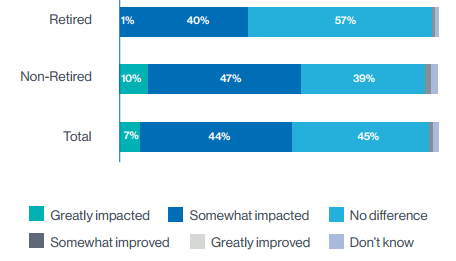 All in all, we discovered a widespread lack of proper retirement income planning. 17% of retirees have accessed their pots without any planning at all and 41% haven’t made any concrete plans.

Savers were risk and change-averse: 56% of those who had used a default fund during the accumulation journey wanted to stay in the same product during decumulation.

As most savers do not access advice, it’s especially important that providers get communication right, at least until savers’ attitudes towards advice change. Developing strong educational tools to engage members is particularly important earlier on in the savings journey. Better education may just mean a nudge in the right direction. For example, the 25% tax-free cash lump sum accessible from aged 55 is one of the most widely known and appealing elements of today’s DC pensions. But with so many members expressing concerns about their projected retirement income, or moderating their aspirations, we believe policymakers and providers could encourage retirees to think flexibly for their individual needs. That may mean taking their cash as phased income, rather than as a retirement windfall which leaves them with less invested later on. Providers could model the impact on savers’ portfolios of taking the cash all at once, versus incrementally, so that members have an easy and tangible comparison of the real effects on their retirement income.

And there were other myths to bust and knowledge gaps to fill – some of which have sprung up since the Freedom and Choice reforms:

Five years on, we are still only partway towards ensuring the Freedom and Choice reforms fulfil their promise for this generation of retirees-to-be. It’s certainly welcome that members have more flexibility, and tax-free cash is a well-known and well-used feature. The key will be helping savers capitalise on these benefits as they enter drawdown, rather than leaving them mired in a consumer’s dilemma where more freedom to choose actually leads to more confusion. To read the full article please go here.

For professional clients only. Past performance is not a guide to future performance. The value of an investment and any income taken from it is not guaranteed and can go down as well as up, you may not get back the amount you originally invested. Legal & General Investment Management Ltd, One Coleman Street, London, EC2R 5AA Authorised and regulated by the Financial Conduct Authority.